On 17 May 2021, former attorney general and prominent government critic Jayaram Valayden was detained by Mauritian security forces and charged with organizing a rally in contravention of the country’s Quarantine Act, a COVID-19 containment measure that prohibits public gatherings of more than 10 people (CNBC Africa, 2021).

Though remarkable, the incident was just the latest in a series of government attempts to constrain political activity and dissent, a trend that has earned Mauritius a spot among the V-Dem Institute’s (2021) “top 10 autocratizing countries” in the world (Kasenally, 2021; Degnarain, 2021). While Mauritius has retained its top position in the Ibrahim Index of African Governance, its score has been declining as social protections and the environment for human rights deteriorate (Mo Ibrahim Foundation, 2020).

Recent criticisms have highlighted perceived irregularities and unfair practices in the 2019 national election that led to a significant decline in the V-Dem indicator for quality of elections (V-Dem Institute, 2021; Darga, 2021a). Restrictions on opposition parties and civil society organizations have contributed to worries about a weakening democracy (L’Express.mu, 2020; 2021a). A series of corruption scandals has tainted the country’s response to the COVID-19 pandemic (National Audit Office, 2021; Lemauricien.com, 2020).

In April, the government’s Information and Communication Technologies Authority proposed decrypting all social media content, including private messages – a move that critics in civil society and the media say amounts to implementing a digital surveillance system (L’Express.mu, 2021b; Saramandi, 2021).

Amid these concerns, how do Mauritians see their democracy?

Afrobarometer survey findings show that Mauritians are highly politically engaged, support democracy, and value their freedom of association and freedom of the media, including unrestricted access to the Internet and social media. However, their satisfaction with the way democracy works in Mauritius has declined significantly over the past decade. Their assessments of election quality have worsened, trust in public institutions and government officials is low, and a majority of Mauritians say the country is going in the wrong direction. 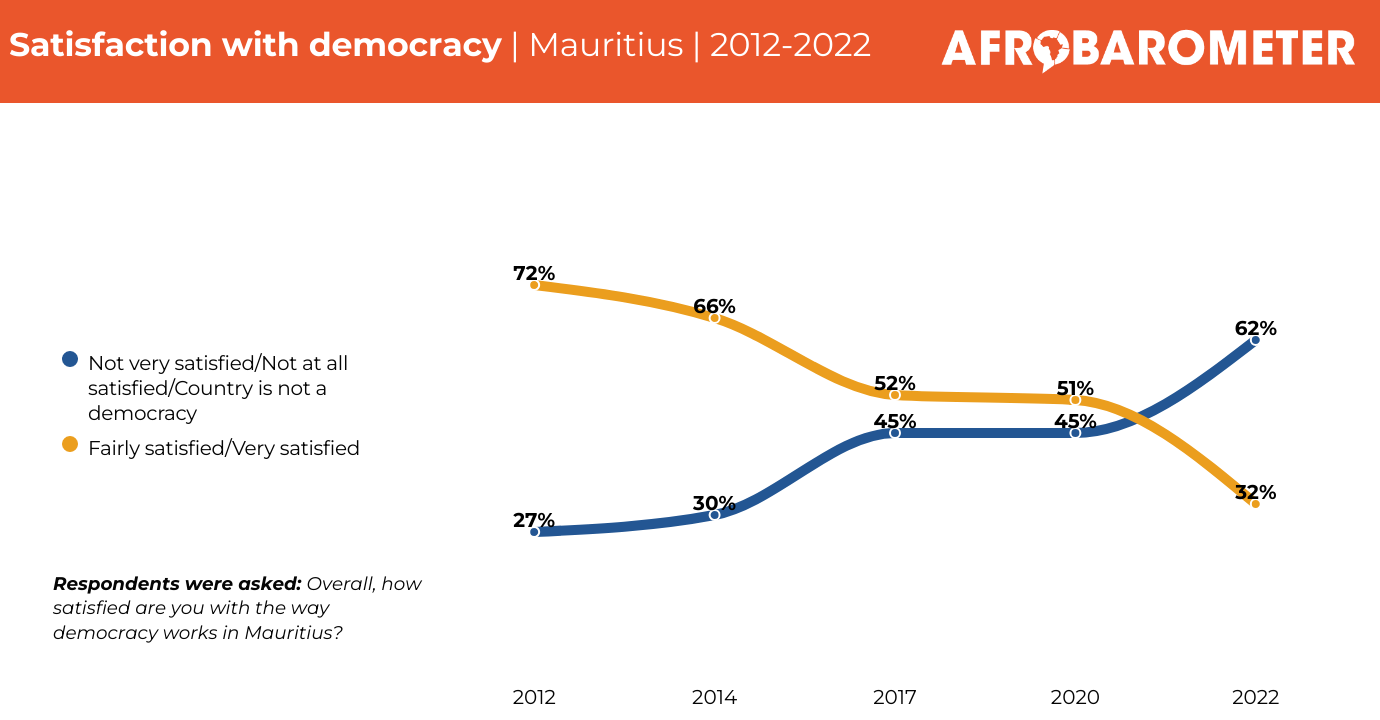