Botswana is the oldest multiparty democracy in sub-Saharan Africa, boasting 11 successful national elections since independence in 1966. The country’s Constitution provides for a parliamentary system with two chambers: Parliament, which makes laws, and the House of Chiefs (Ntlo ya Dikgosi), which serves in an advisory capacity on matters of tradition and customs. Except for a few sub-districts where chiefs are elected, chieftainship is a hereditary institution based on tribal lineage.

Some observers have attributed Botswana’s political stability to its judicious blending of republican and traditional institutions, crediting chieftainship (bogosi) with a critical role in Botswana’s democratic development as well as its people’s daily lives (Samatar, 1997; Mmegi, 2019; Moumakwa, 2010; Sharma, 2010). Among chiefs’ contributions to democracy, they cite their frequent interaction with citizens and problem-solving role in their communities as well as their facilitation of kgotla meetings through which the government and elected leaders consult citizens.

In the run-up to the 2019 elections, the appeal of traditional institutions was used to gain political mileage. The falling-out between former President Ian Khama Seretse Khama and President Mokgweetsi Masisi took on a tribal tinge when Khama retreated to his tribal seat in the Central District to galvanize support for his new political home, the Botswana Patriotic Front. But while the opposition did well in some Central District constituencies previously regarded as strongholds of the ruling Botswana Democratic Party, it fell short of breaking the BDP’s undefeated record at the polls.

Against this background, how do ordinary Batswana see the interface between republican and traditional institutions? Findings from the recent national Afrobarometer survey show that while most Batswana support democracy and reject non-democratic alternatives, they also hold positive views of traditional leaders’ contributions and think that they strengthen, rather than weaken, democracy. In fact, a majority of citizens would prefer that chiefs play a greater role in governing local communities. But most would like traditional leaders to stay out of partisan politics. 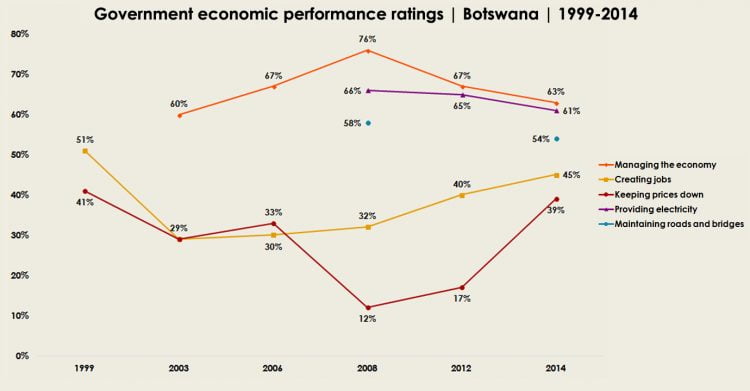