In 2019, President Julius Maada Bio declared rape and sexual violence a national emergency in Sierra Leone. This followed intense pressure and protest by civil society groups after the rape and subsequent paralysis of a 5-year-old girl (Mitchell, 2020). While such heinous crimes were not new, activists cited an increasing number of rapes (Mules, 2019) and Sierra Leone’s history of violence against women.

During the country’s civil war (1991-2002), between 215,000 and 257,000 women and girls were victims of sexual and gender-based violence (SGBV) (Physicians for Human Rights, 2002). While some point to the civil war as the reason for continued high rates of SGBV, others argue that they are the result of deep-rooted patriarchal norms and beliefs that pre-date the war and created a “rape culture” (Africanews, 2019).

Sierra Leone has a robust set of laws to protect women and girls, but research has shown that legislation is not enough (Medie, 2013). Despite three gender laws adopted in 2007 and the Sexual Offences Act of 2012, rates of rape and impunity for these crimes remain high. According to BBC News (2018), rapes in Sierra Leone more than doubled from 2017 to 2018, from 4,000 to more than 8,500, although the actual number of cases likely exceeds this as rape is underreported. The Rainbo Initiative, one of the few organizations in the country that offer free medical treatment and psychosocial counselling for SGBV survivors, received 2,900 survivors of SGBV at its centers in 2018, and this figure increased to 3,701 in 2019 (Mitchell, 2020).

Of particular concern is the age of victims: At least 70% are minors (Kardas-Nelson & Inveen, 2019). Survivors find it difficult to access justice; only 1.2% of the cases Rainbo recorded in 2019 were successfully prosecuted. Reasons for high impunity include a culture of compromise, poorly resourced police and judiciary, and a lack of forensic equipment to strengthen evidence generation (ReliefWeb, 2010; Mules, 2019, Schneider, 2019).

To address these issues, the president called for life imprisonment for anyone found guilty of rape of a minor, as well as a dedicated division in the courts to investigate these crimes, among other measures. However, his declaration did not have the force of the law. In October 2019, Parliament passed the Sexual Offences (Amendment) Act of 2019, which incorporated some of the punishments articulated in the president’s declaration, mediated by input from women-led and women-focused organizations (M’Cormack-Hale, forthcoming).

Findings from the most recent Afrobarometer survey in Sierra Leone show that most citizens are aware of the declaration of rape as a national emergency and the revision of the Sexual Offences Act, and they approve of both. However, a majority of citizens believe that these measures will not be enough and point to the need for the government to do more to change sexual attitudes and behaviors in the country. 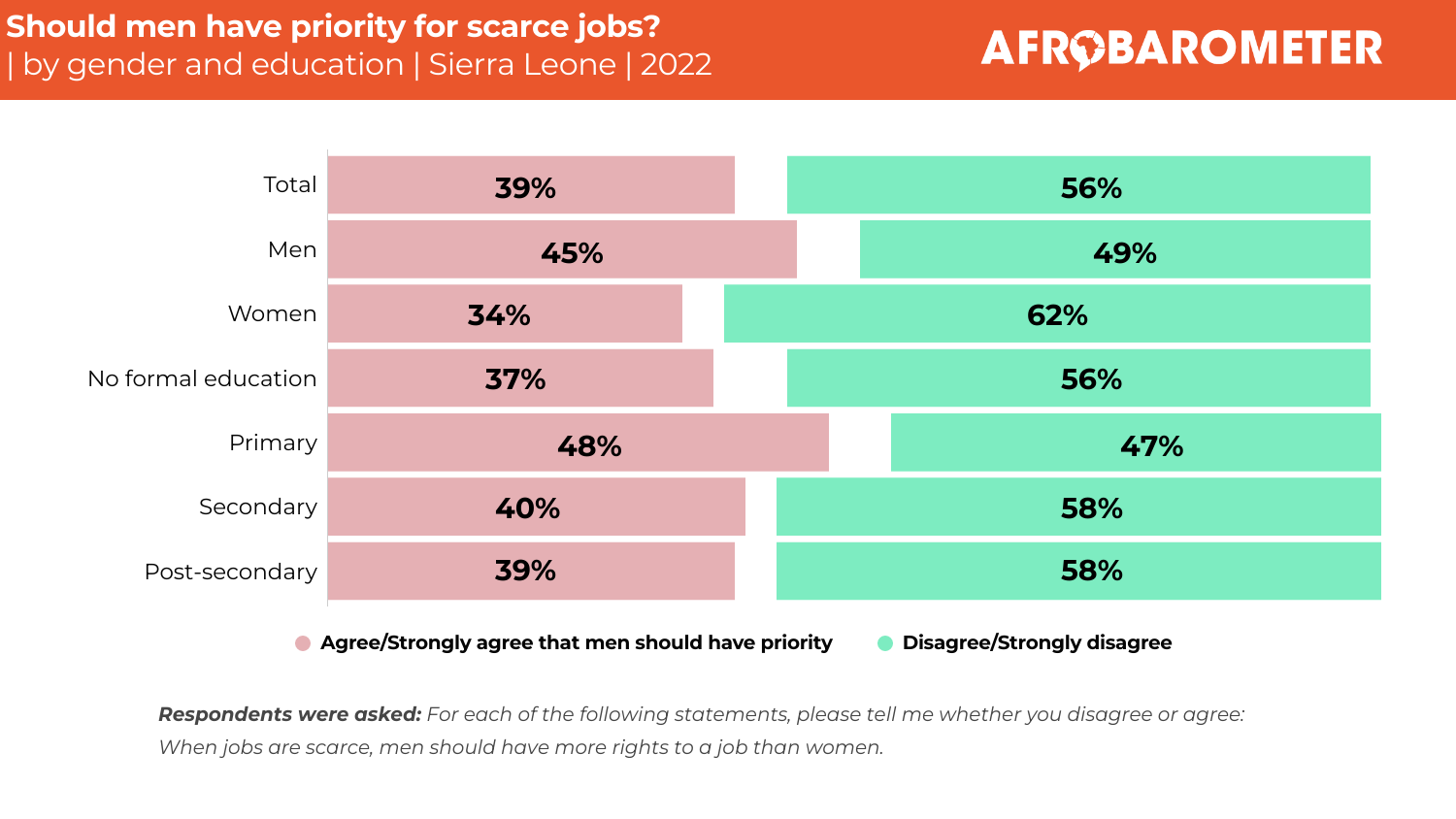 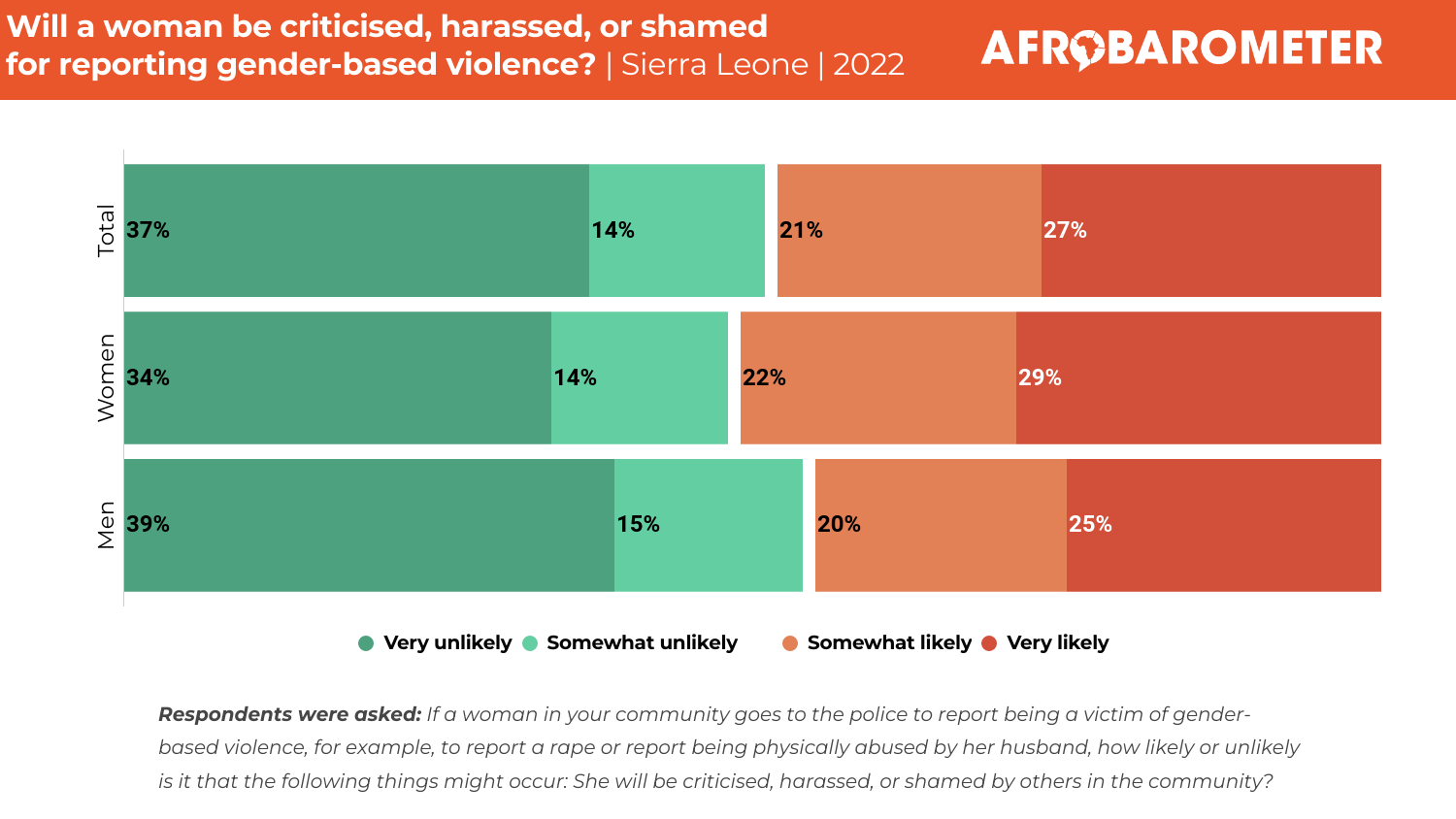 Dispatch
AD565: Gender-based violence a high priority in Sierra Leone, but citizens say it is a private matter
24 Oct 2022