In September 2019, a bill was tabled in Malawi Parliament proposing a constitutional change from a unitary to a federal system of government (Nyale, 2019). The bill was referred to the Legal Affairs Committee of the House for further scrutiny and is expected to be back on the floor for deliberation once the committee prepares its report. This follows a similar attempt in 2018, when the motion was defeated after intense debate characterized by sharp divisions along regional lines as most members from the Northern and Central regions supported the bill while those from the Southern region opposed it (Khamula, 2018; Kapulula, 2018).

Proponents of the proposed change argue that the government, which has been led by presidents from the Southern region since Malawi’s return to democracy in 1994, has neglected the other two regions, especially the North, in terms of infrastructure development and social services. They accuse the government of nepotism in appointments to state institutions and of adopting discriminatory policies such as a quota system for selecting students into public colleges and universities. A movement comprising religious leaders, civil society organizations, and academics in northern Malawi called the Forum for the Advancement of Federal System and Rural Development has been championing the cause through marches, petitions, and public statements (Moyo, 2015). According to the legislator who tabled the bill in 2019, Yeremiya Chihana, a federal system of government would help rectify the inequitable distribution of resources and development (Khamula, 2019) by giving regional governments political and financial decision-making powers currently controlled by the central government.

Opponents of the proposed bill argue that federalism is a recipe for further tribal cleavages. The ruling party accuses the opposition of being bad losers and resorting to divisive politics as a way of gaining political power (Mponda, 2019).

As the debate rages on and Parliament continues to process the bill, findings from an Afrobarometer survey in November-December 2019 show that most Malawians – even a majority of residents in the Northern region – reject federalism as a remedy for resource and development inequalities. At the same time, more than half of all Malawians say that their respective ethnic groups are treated unfairly by the government and that communities that don’t vote for the ruling party suffer negative consequences in terms of public services and development projects. 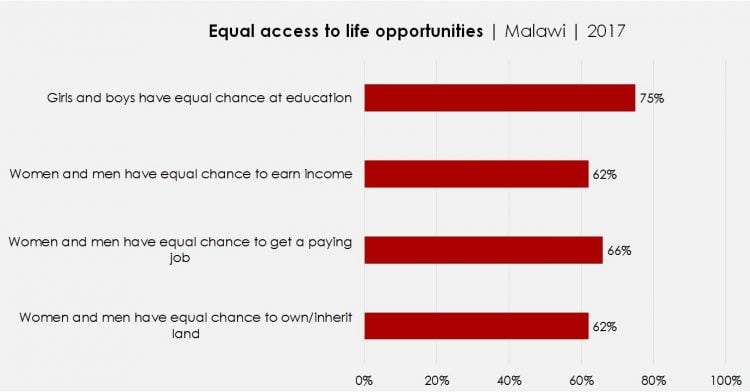