Madagascar represents both a paradox and a common African story. The country is blessed with some of the world’s largest known natural-resource reserves, especially high-grade iron ore and precious stones such as alluvial sapphires. At the same time, its people are among the world’s poorest. According to a 2015 report by the International Monetary Fund (IMF), more than six out of 10 Malagasy suffer from extreme food poverty, three out of four live under the absolute poverty line, and nine out of 10 live on less than $2 a day. Across Africa, only the Democratic Republic of Congo, Liberia, and Burundi fare worse in this regard (IMF, 2015). Furthermore, the IMF estimates that poverty in Madagascar increased between 2001 and 2010, going against the economic growth trend experienced by many African countries. Given the wealth of natural resources and poverty of the people, this dispatch examines how ordinary Malagasy view the impacts of the mining sector. Does it reduce unemployment and poverty in Madagascar? Does it strengthen the domestic private sector by stimulating support services? Does it improve security in the country by mobilizing more military resources in the areas of exploitation (see Jütersonke & Dönges, 2015)? Findings from Afrobarometer’s 2014/2015 national survey suggest that most Malagasy think the mining sector contributes at least “a little” to creating jobs and reducing poverty as well as to strengthening the domestic private sector, while fewer see it as impacting security in the country. Positive views of the sector’s impact are especially strong among citizens who are economically better off, who are employed, and who assess Madagascar’s economic situation as good 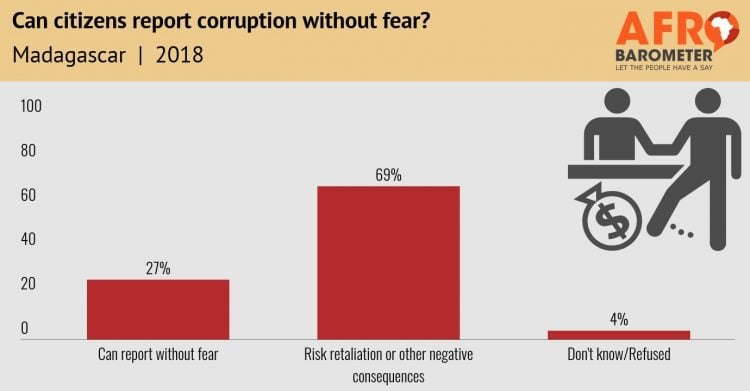