South Africa now has the unfortunate reputation as one of the more hostile destinations in the world for African migrants. Widespread attacks targeting foreigners took place in May 2008, killing 62 people and making international headlines. Another wave of violence occurred in April 2015, leading to an outcry across Africa and the recall of the Nigerian ambassador. These are not attacks caused by small bands of provocateurs or criminals; both qualitative and quantitative evidence suggests widespread participation in, and support for, the violence in the affected communities (Claassen, 2014). Indeed, a number of commentators have remarked on the elevated levels of xenophobia observed in South Africa (see, for example, Mattes, Taylor, McDonald, Poore, & Richmond, 1999), with African nationals, in particular, facing everyday hostility and violence (Everatt, 2010). Thus, rather than a case of rare and sporadic attacks disturbing otherwise peaceful relations between locals and African immigrants, South African xenophobia appears to take the form of widespread antipathy and intolerance punctuated by acts of hostility and violence.

South African xenophobia has national and regional political consequences. The violence that took place in 2008 and 2015, as well as the hate crimes that occur with everyday regularity, present a pressing human rights concern. Furthermore, as Landau (2011, 2012) has noted, such levels of intergroup hostility are a symptom of a deep social and political malaise. Finally, as the sharp international reaction to the 2015 attacks indicates, South African xenophobia now constrains the country’s international relations, particularly within Africa.

This paper investigates the determinants of South African xenophobia. Despite a great deal of reflection, commentary, and research by government, civil society, and scholars, we have a poor understanding of the factors that influence and shape hostility toward African immigrants. The problem is not a scarcity of explanations, but an overabundance. With up to a dozen explanations proffered by experts, we have little idea what actually causes hostility toward immigrants. Moreover, the laundry list of possibilities gives little clue whether some causal factors are contingent on others, as is often the case in social processes. 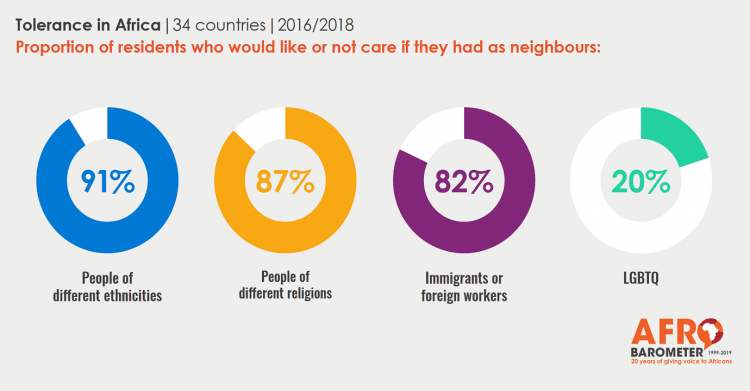 Dispatch
AD362: ‘All in this together’: Africans tolerant on ethnic, religious, national, but not sexual differences
19 May 2020
Media resource
Government performance and leadership trends in South Africa; trust and accountability of the President
24 Nov 2015
Event
Rhodes University School of Journalism’s Highway Africa 2015 Conference: Journalism and the City
30 Aug 2015