In a democracy, citizens delegate powers to individuals and political parties charged with building and maintaining institutions that will ensure the people’s well-being. In this arrangement, trust is one of the most important ingredients in the legitimacy and sustainability of political systems (Blind, 2006).

In Lesotho, popular trust in the police, the army, and the courts of law dropped sharply between 2014 and 2017, according to Afrobarometer public-attitude surveys. This occurred at a time of considerable upheaval in Lesotho that led the Southern African Development Community (SADC) to recommend a wide-ranging series of constitutional and institutional reforms (Adams, Nkuebe, & Malephane, 2018).

Politically, an attempted coup in 2014 led to the dissolution of the 2012 coalition government and an early election in February 2015, followed by what many saw as moves toward a “militarization” of the state. This included mass arrests in the army and the assassination of the former commander of the Lesotho Defence Force. Court orders for the release of some of the arrested soldiers were ignored. High-profile military-style killings rocked the nation, and opposition leaders fled to South Africa (Matlosa, 2017). The police were implicated in human-rights violations, including the death of Constable Mokalekale Khetheng in 2017 (Lesotho Times, 2017; Amnesty International, 2018).

At the same time, Lesotho’s economic performance continued to be poor (World Bank, 2018), with high unemployment and emigration. Several high-profile corruption scandals made headlines, including one cited in a 2017 motion of no confidence in former Prime Minister Pakalitha Mosisili that led to a third general election in five years. The judiciary, meanwhile, came under fire for lack of independence from the executive, exemplified by the forced departures of the chief justice and the president of the appeal court (Sunday Express, 2016; Daybreak News, 2018).

Against this context of continuing crisis, this policy paper uses Afrobarometer survey data to examine causes and implications of the marked decline in popular trust in government. Analyses show that rising perceptions of official corruption have resulted in sharply lower levels of trust in institutions of public order, which in turn has negatively impacted citizens’ perceptions of their democracy and increased the likelihood that Basotho may wish to leave the country. These findings confirm the damaging effect of corruption on trust and its potential to erode Lesotho’s fledgling democracy, clearly pointing to a need for the government to fight corruption more effectively. 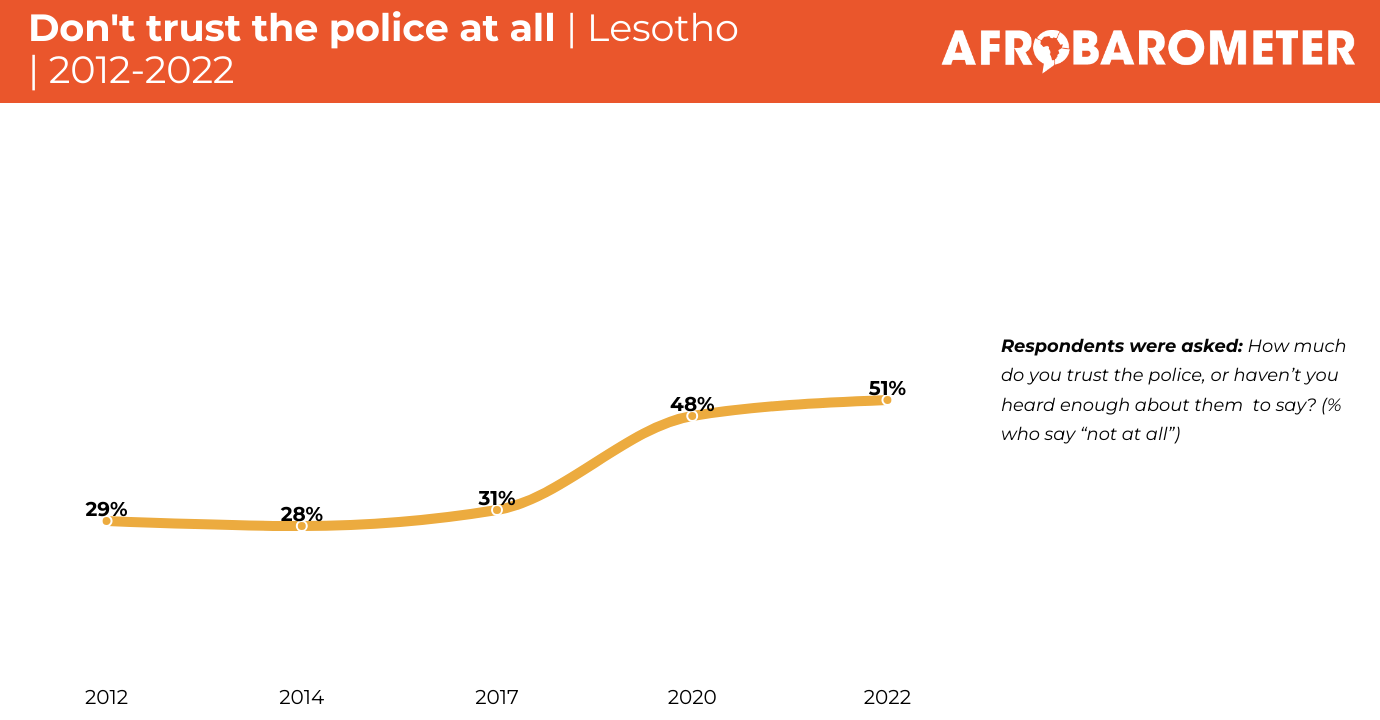