The African National Congress (ANC) has dominated post-apartheid South Africa’s political landscape. Following the 2014 national and provincial elections, the party holds 62% of National Assembly seats and governs eight of the country’s nine provinces (Independent Electoral Commission, 2016).1 In the run-up to local elections on 3 August 2016, the two leading opposition parties – the Democratic Alliance (DA) and Economic Freedom Fighters (EFF) – are portraying the poll as a political watershed for South Africa’s democracy in the wake of the Constitutional Court judgment against President Jacob Zuma and other leading ANC members regarding the use of state funds in the construction of the president’s private residence, Nkandla (Democratic Alliance, 2016; Economic Freedom Fighters, 2016). The two parties were the applicants in the court case, which invalidated the National Assembly’s decision to absolve the president from remedial action determined by the Public Protector in March 2014 (Constitutional Court, 2016).

Results from the 2015 Afrobarometer survey, conducted before this latest development in the Nkandla scandal, suggest an evolving terrain for South Africa’s opposition. Public trust in opposition parties has tripled since 2002 despite a dip in 2015, while trust in the ANC has dropped sharply over the past four years. But less than half of South Africans believe that opposition parties present a viable alternative vision and plan for the country. Furthermore, a majority of citizens say the ANC is better able than the opposition to address national priority areas such as controlling prices, creating jobs, improving health care, and fighting corruption. The proportion of South Africans who say that “opposition parties should monitor and criticize the government in order to hold it accountable” has been decreasing since 2008, reaching 28% in 2015, although this was before opposition-led support for the Public Protector’s findings succeeded at the Constitutional Court.

The ANC secured 64% of the votes in the 2011 municipal elections (Independent Electoral Commission, 2011). These survey findings suggest that opposition parties will face significant challenges in diminishing the ANC’s electoral dominance in the upcoming elections, particularly since few South Africans cite policy issues as the main difference between parties. However, they could make inroads among large proportions of citizens who do not feel close to any political party. 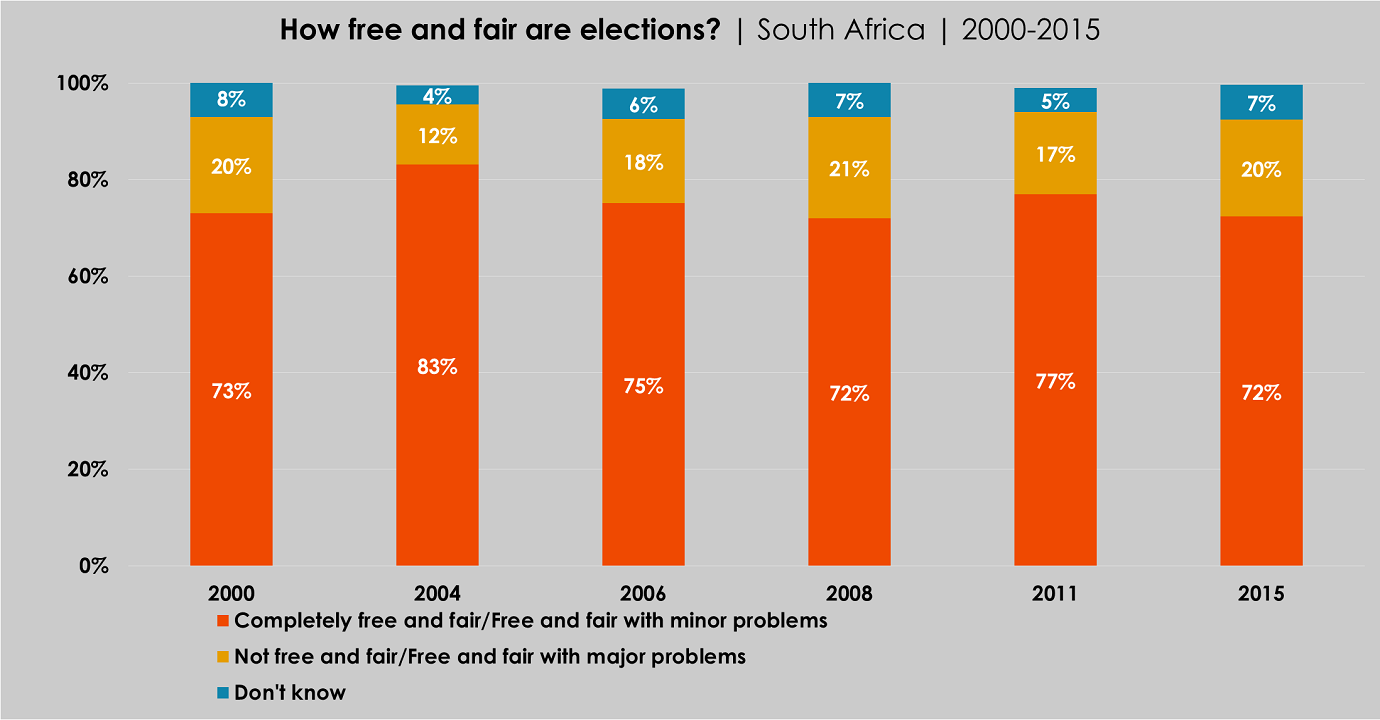