Rolling blackouts may make headlines; a complete lack of electricity infrastructure usually doesn’t. Both are part of Africa’s electricity deficit, a major obstacle to human and socioeconomic development with pernicious effects on health (think of clinics without lifesaving equipment and refrigerated drugs and vaccines), education, security, and business growth.

They are also targets of high-profile development initiatives, from the U.S.-led Power Africa initiative and Electrify Africa Act to the African Development Bank’s New Deal on Energy for Africa, the United Nations’ Sustainable Energy for All partnership, and national strategies for helping meet the seventh Sustainable Development Goal. As U.S. President Barack Obama said in launching Power Africa (U.S. Agency for International Development, 2013),

Access to electricity is fundamental to opportunity in this age. It‘s the light that children study by; the energy that allows an idea to be transformed into a real business. It’s the lifeline for families to meet their most basic needs. And it’s the connection that’s needed to plug Africa into the grid of the global economy. You’ve got to have power.

Millions of Africans don’t. Many others do, then don’t, then might – all in the same day. In its 2014/2015 surveys, Afrobarometer has documented the reach and quality of electrical connections through nearly 54,000 interviews in 36 African countries as well as direct observations in thousands of communities across the continent. Providing an experiential baseline for international and national efforts to develop adequate electricity infrastructure, survey findings suggest that such initiatives will need long-term commitments and deep pockets.

On average across the 36 countries, only four in 10 Africans enjoy a reliable power supply. While about two-thirds of Africans live in areas with access to an electric grid, in some countries seven in 10 citizens – and as many as nine in 10 in rural areas – do not. Actual household connections to the grid are somewhat lower (60% on average), and equally variable across countries.

Abel is the surveys manager for East Africa 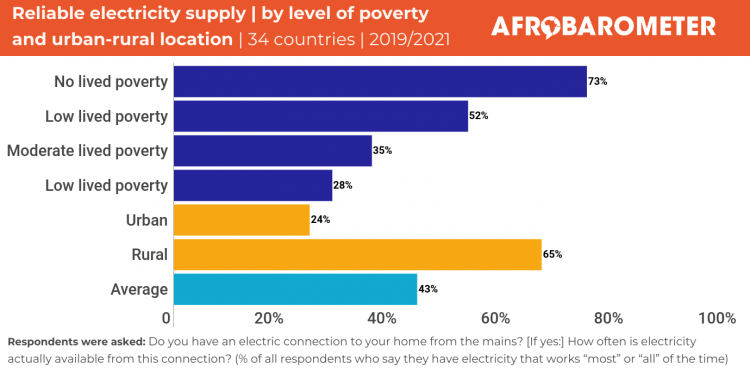