Kenya’s Constitution enshrines the right of every child to be “protected from abuse, neglect, harmful cultural practices, all forms of violence, inhumane treatment and punishment, and hazardous or exploitative labour” (Republic of Kenya, 2010).

Yet the Ministry of Labour and Social Protection’s 2019 Violence Against Children Survey found that about half of the country’s girls and boys had experienced physical, emotional, or sexual violence – an improvement from its 2010 findings, but still alarmingly high (Republic of Kenya, 2019; UNICEF, 2020).

In response, the government launched its 2019-2023 National Prevention and Response Plan on Violence Against Children, supported by a “Spot It, Stop It” publication information campaign (UNICEF, 2019; ReliefWeb, 2020). This year it followed with the Children Act 2022. In seeking to eliminate all forms of violence against children, the act explicitly prohibits corporal punishment as well as “online abuse, harassment or exploitation” (End Violence Against Children, 2022).

How do Kenyan citizens see their country’s progress in the protection of children?

This dispatch reports on a special survey module included in the Afrobarometer Round 9 (2021/2022) questionnaire to explore Africans’ attitudes and perceptions related to child welfare.

More than half of Kenyans consider it acceptable to use physical force to discipline children, though opposition to corporal punishment is growing and most citizens say this practice is not very common in their community. Majorities also report that child abuse and neglect are infrequent problems in their community.

They say that resources are available in their community to help abused and neglected children, children with disability, and children and adults with mental or emotional problems.

Still, only half of Kenyans give their government good marks on protecting and promoting the well-being of vulnerable children. Satisfaction with the government’s efforts is particularly low among poor citizens and those without formal education, who are more likely to see child abuse/neglect as frequent problems and less likely to report that support services for vulnerable children are available.

Simon is the communications for East Africa at Afrobarometer 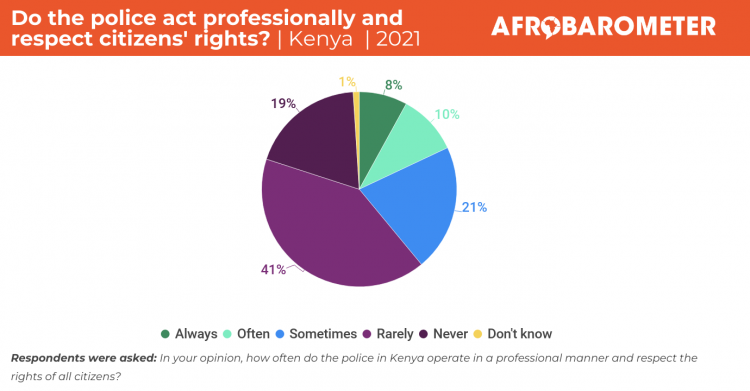