Lesotho is headed for a general election in October 2022, the eighth since the country’s return to democratic rule in 1993. As of mid-July, 60 parties – some of them launched within the past few months – were registered with the Independent Electoral Commission (2022).

After the 1998 elections, which were violently contested (Pherudi & Barnard, 1998), Lesotho changed its electoral system from “first past the post” to a mixed member proportional system. In line with the literature on electoral systems (Norris, 2003; Curini & Martelli, 2009), this change has seen the number of parties entering the political arena and contesting elections increase steadily, from 11 in 1998 to 27 in 2017 (Independent Electoral Commission, 2022), while voter turnout has steadily decreased, from 72% in 1998 to 46% in 2017 (International Institute for Democracy and Electoral Assistance. 2021). Since 2012, no political party in Lesotho has won the majority of parliamentary seats required to form a government.

A new Afrobarometer survey in Lesotho indicates that Basotho are approaching the election in a grim frame of mind. Most citizens say the country is going in the wrong direction, citing poor economic conditions and increasing corruption.

Majorities do not trust their political leaders and are critical of the performance of the current prime minister, members of Parliament (MPs), and community/urban councillors. More broadly, support for democracy, elections, and multiparty competition is weak, as more than seven in 10 citizens are dissatisfied with the way their democracy is working.

Only about half say they are likely to vote in the upcoming election. Among those willing to disclose a voting preference in a hypothetical election, the Democratic Congress (DC) has a substantial lead but falls short of a majority.

Libuseng is the national partner representative for Anglophone countries at Afrobarometer 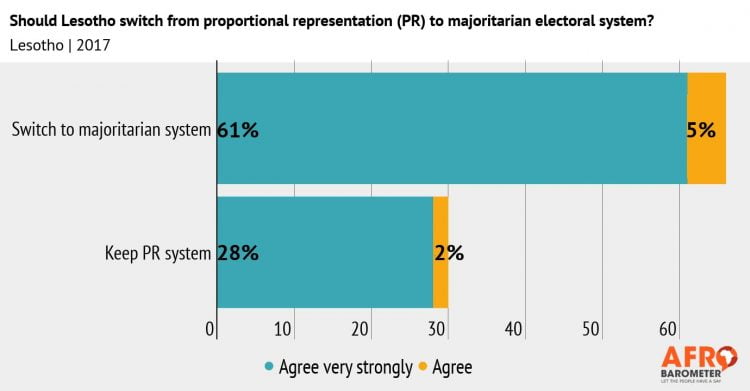