Over the past three decades, Uganda’s national poverty rate has fallen by more than half, from 56% in 1992/1993 to 21.4% in 2019/2020, owing mostly to improved agricultural incomes among poor households and improved regional markets after the end of conflict in Northern Uganda (Uganda Bureau of Statistics, 2020; World Bank Group, 2016).

In an effort to address poverty, the government has initiated a variety of programmes. In the late 1980s, the Rural Farmers Scheme aimed to boost agricultural productivity and farmers’ livelihoods through credits, but most farmers were unable to benefit from the initiative, which ultimately failed.

In 1995, a similar credit finance scheme known as Entandikwa (“seed capital”) provided loans to the rural and urban poor, youth, disabled people, and women, but only about 40% of loans advanced to the target groups were recovered.

A slew of more recent poverty-alleviation initiatives has included Bonna Bagaggawale (“prosperity for all”), National Agricultural Advisory Services (NAADs), Plan for Modernization of Agriculture, Operation Wealth Creation, and Emyooga. These interventions, too, have yielded little or no success, and most have been abandoned.

Recent Afrobarometer survey findings show that a majority of Ugandans continue to experience frequent shortages of basic necessities in their daily lives. Relatively small proportions report that someone in their household ever benefited from various government poverty-alleviation programmes, and a majority give the government poor marks on its efforts to improve living standards of the poor and create jobs. 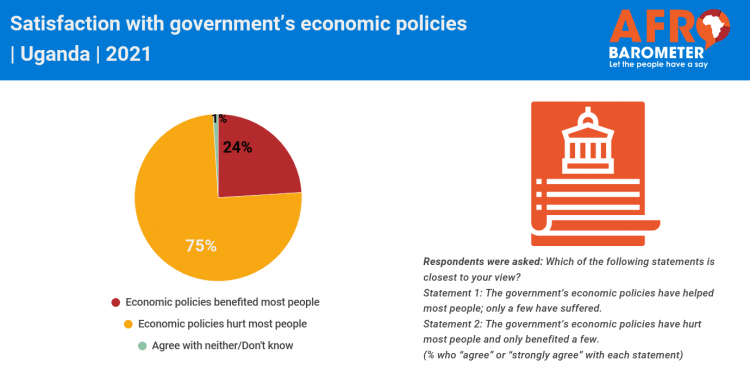