On March 15, 2020, Uganda’s government ordered the closure of all primary and secondary schools, universities, and other educational institutions to stem the spread of COVID-19, keeping approximately 15 million children out of school (Independent News, 2020).

Twelve months later, the government began a phased reopening of schools, only to close them again in June 2021 as coronavirus cases were surging in the country. On 10 January 2022, the schools opened again after nearly two years of lockdown, marking the end of the world’s longest school closure due to the COVID-19 pandemic (Voice of Africa News, 2022).

While schools were closed, the government adopted several approaches to keep children in lower schools learning, including the printing and distribution of home learning materials as well as the delivery of lessons via television, radio, newspapers, and the Internet (Independent News, 2021a). But due to limited access – especially among rural and economically disadvantaged children – to electricity, the Internet, televisions, and newspapers, many children missed out on learning, exacerbating educational inequalities in the country.

The extended school closure posed other challenges as well. Since the outbreak of COVID- 19, pregnancies among school-age girls are estimated to have risen by 30% (New African, 2021). Many teachers had to resort to small businesses to support their families (Guardian, 2021). Some private school owners sold their schools or converted them to other businesses (Parliament of the Republic of Uganda, 2021).

According to a report by the National Planning Authority (2021), about 3,507 primary and 832 secondary schools were expected to close due to financial hardship, and nearly 30% of students are projected never to return to school because of teenage pregnancies, early marriages, and child labour.

In the event of future disruptions to in-school learning in Uganda, how feasible is e-learning as an alternative?

Recent Afrobarometer survey findings show that relatively few Ugandan households have access to electricity, Internet-enabled phones, televisions, and computers. Access is particularly low among poor citizens and those who live outside the cities and the Central Region. For the foreseeable future, e-learning is likely to disadvantage or exclude more children than it serves. 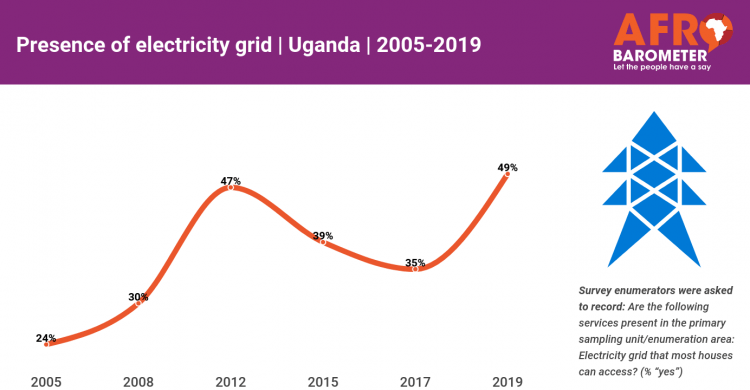