On 25 October 2015, Côte d’Ivoire will conduct its first presidential election since the disputed 2010-2011 contest and civil war. The election pits President Alassane Ouattara against Pascal Affi N’Guessan and other challengers. In recent weeks, several candidates have voiced concerns about electoral institutions and the election environment, and former National Assembly President Mamadou Koulibaly withdrew his candidacy, citing doubts about the fairness of the election.

Recent results from the Round 6 Afrobarometer survey, conducted in August and September 2014, suggest that many Ivoirians share these concerns and are sharply divided in their perceptions and expectations regarding the upcoming election.

While there is a strong consensus that leaders should be selected through regular elections and that it is the duty of good citizens to vote, Ivoirians are divided in their views of the direction of the country and the state of the national economy. Most believe that elections do not function well to remove underperforming leaders and have not incentivized politicians to serve the people rather than their own ambitions.

Survey results show strong mistrust of the Independent Electoral Commission (CEI), and only a minority of citizens believe that the last parliamentary elections in 2011 were mostly or completely free and fair. The CEI, which was at the centre of the 2010-2011 crisis, has reduced the number of commissioners, but larger reforms demanded by some political parties and civil society have not been undertaken.

Sizeable proportions of Ivoirians express concerns about the election environment, including the bribery of voters, biased media coverage, the likelihood of unfair vote counting, and threats to voters at polling stations. Among the 13 Economic Community of West African States (ECOWAS) countries where Afrobarometer Round 6 surveys have been completed, Côte d’Ivoire ranks second only to Nigeria in the proportion of citizens who fear election-related violence.

President Ouattara enjoys fairly high approval ratings, and public trust in the president is higher than in the ruling coalition or the opposition. A slim majority of Ivoirians say they feel “completely free” to vote as they choose.

As Côte d’Ivoire, which signed the African Charter on Democracy, Elections and Governance in 2009, approaches a pivotal presidential election, these survey findings provide a window on how citizens think their government is delivering on its commitment to conduct secure, high-quality, and competitive elections. 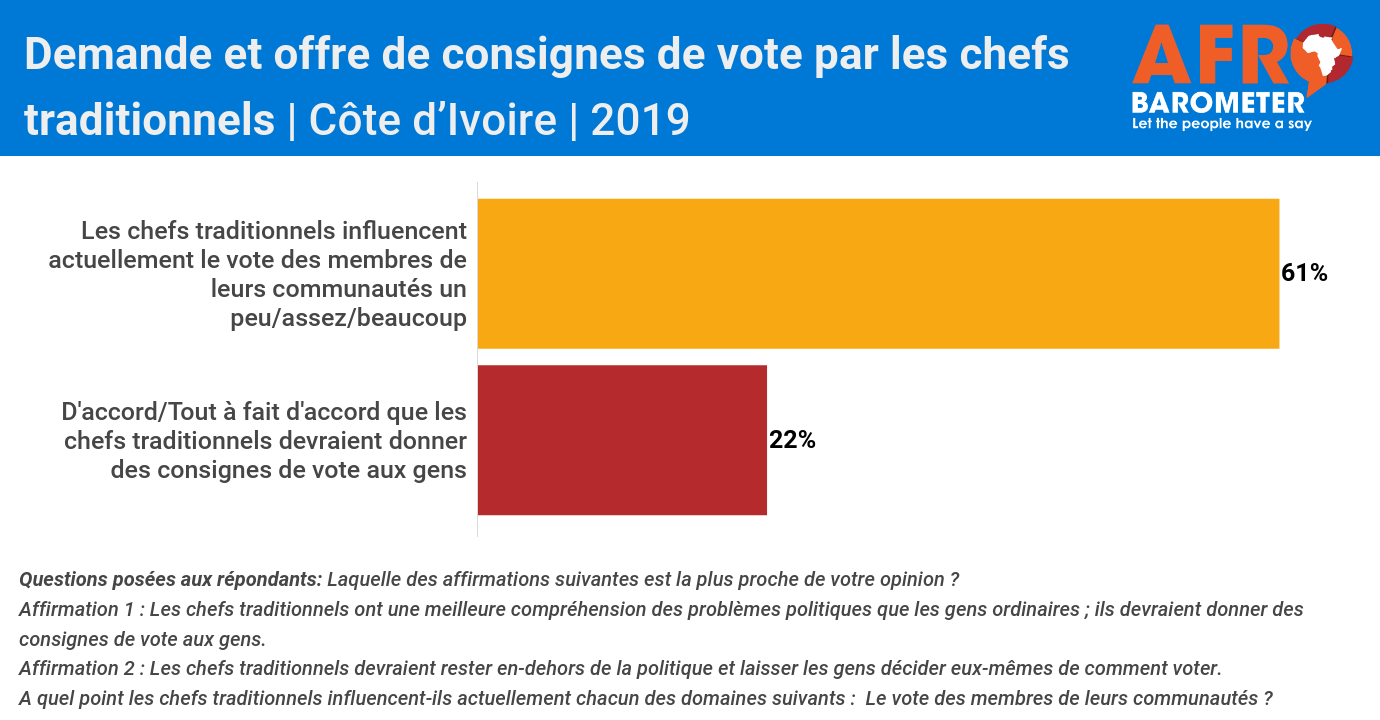