Electricity is a major determinant of a country’s economic prosperity. Lack of access to electricity has an enormous impact on the use of emerging technologies, modern economic activities, public service delivery, and standards of living (Blimpo & Cosgrove, 2019).

About 15 years ago, Uganda experienced a power crisis, with electricity demand exceeding the available supply by a 2-to-1 ratio due to delayed capacity additions and low water levels in Lake Victoria (RMI, 2020). Today the country generates a surplus of electricity. Production capacity of 1,254 megawatts as of 2019 (Electricity Regulatory Authority, 2019) is expected to reach 1,800 megawatts if Karuma Dam is commissioned later this year.

Yet Ugandans can only consume about 600 megawatts at peak (Global Press Journal, 2020), in large part because the limited national electric grid doesn’t reach most households.

In an attempt to address this supply-demand gap, the government put in place National Development Plans I & II and the Rural Electrification Strategy and Plan between 2010 and 2015, aiming not only to expand the national electric grid but also to accelerate the pace of gains in electricity access and service penetration (Ministry of Energy and Mineral Development, 2018).

Despite these efforts, the most recent official statistics show that only 26.7% of households have access to electricity, including just 18% in rural areas (Uganda Bureau of Statistics, 2016). In addition to the limited grid, barriers include high electricity tariffs and connection charges (Nabukeera, 2020; Blimpo, McRae, & Steinbuks, 2018). Moreover, funding shortages have slowed the implementation of existing policies, including suspension of the Electricity Connection Policy in late 2020 (NTV News, 2020).

A recent Afrobarometer survey provides an on-the-ground look at electricity access in the country. Findings show that only about half of Ugandans live in zones served by the electric grid, and only a quarter live in households that are connected to the grid. More households use solar energy than electricity from the national grid. Lack of access and connection to the national electric grid is especially common for the poorest citizens, rural residents, and those in the Northern and Western regions. Even so, citizens’ ratings of the government’s performance on providing reliable electricity have improved significantly.

These findings suggest that the government’s plans, policies, and programs, while appreciated by citizens, require accelerated implementation to achieve widespread access and lower electricity costs. 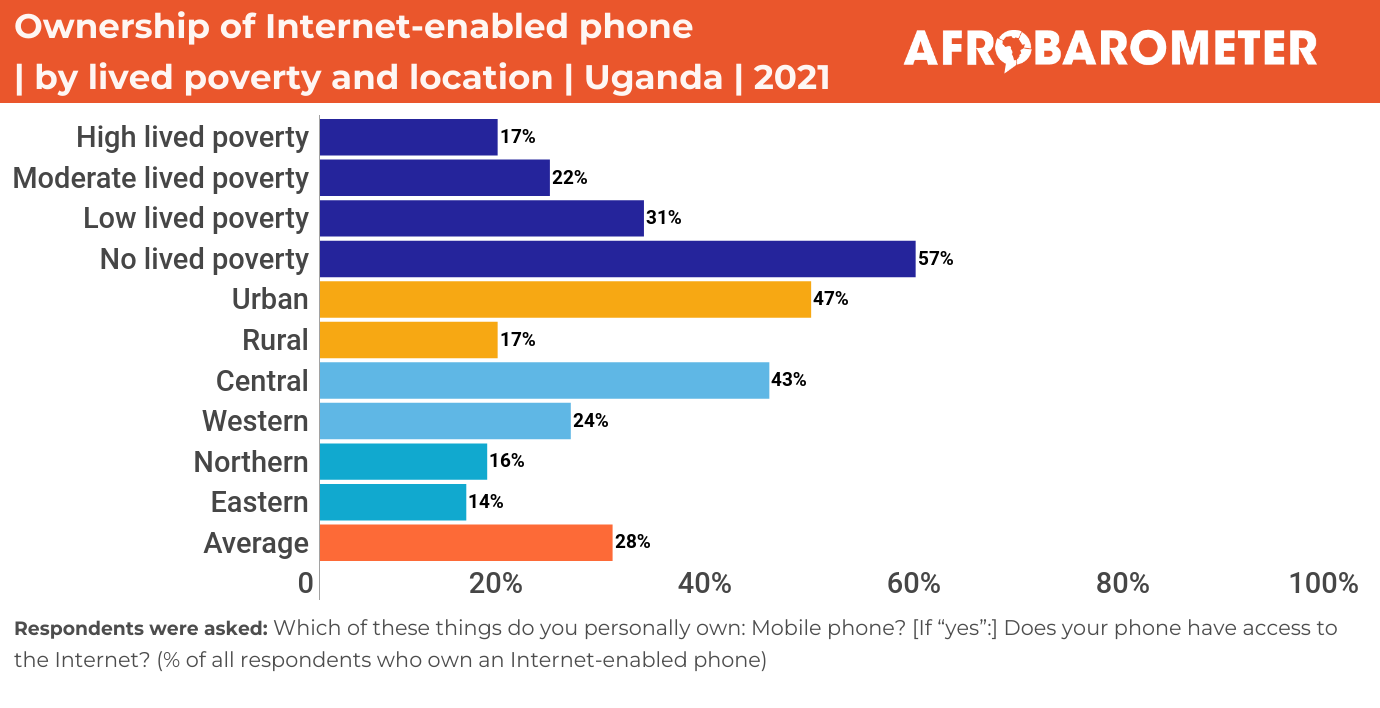