Ghana’s justice sector was adjudged Africa’s sixth-best in the 2019 Rule of Law Index, dropping from first position in 2018 (World Justice Project, 2019). The country is a signatory to the African Charter on Human and Peoples’ Rights and the Maputo Protocol, both of which oblige the state to ensure that citizens have access to the delivery of justice. Article 14 of Ghana’s Constitution also safeguards citizens’ access to justice.

Nonetheless, the judicial sector is burdened with challenges that threaten the efficient delivery of justice. Conditions necessary to ensure efficient and equal access to judicial systems, such as affordability, proximity, comprehensibility, and responsiveness, are not in place for a number of Ghanaians (African Union, 2019). Access to legal assistance is a problem, even for the state: The Attorney General’s Department has very few lawyers – far below the minimum number required to function effectively (Brakopowers, 2018). In addition, the Legal Aid Commission, which has the mandate of rendering free legal services to citizens, operates mainly in the major cities, inhibiting access by the poor and vulnerable (Donkor, 2019). Worse, journalists’ investigative reports on alleged corruption have tainted the judiciary’s reputation (Ghanaweb, 2020).

The government and the judiciary have made efforts to address issues of unequal access to justice delivery, perceived corruption, and dwindling trust in the justice sector. These include the Justice for All Programme, which seeks to reduce the large number of remand prisoners by organizing court sittings in the prisons to hear cases (Judicial Digest, 2017); the “paperless court” initiative to improve case management, reduce processing time, and enable effective monitoring of cases; and the Anticorruption Action Plan for the judicial sector aimed at promoting integrity, transparency, accountability, and responsiveness to corruption complaints (Judicial Digest, 2018).

But findings from a recent Afrobarometer survey suggest that these efforts still have a long way to go. While most Ghanaians endorse the legitimacy of the courts, they also see court officials as corrupt and untrustworthy. More than half say high costs prevent citizens from using the formal justice system, while others cite a bias in favour of the rich and powerful and long delays as barriers.

Among those who had contact with the justice system during the previous year, many rate the system as high on corruption and low on fairness and transparency.

Gildfred Boateng Asiamah is a research analyst at the Ghana Center for Democratic<br /> Development (CDD-Ghana). 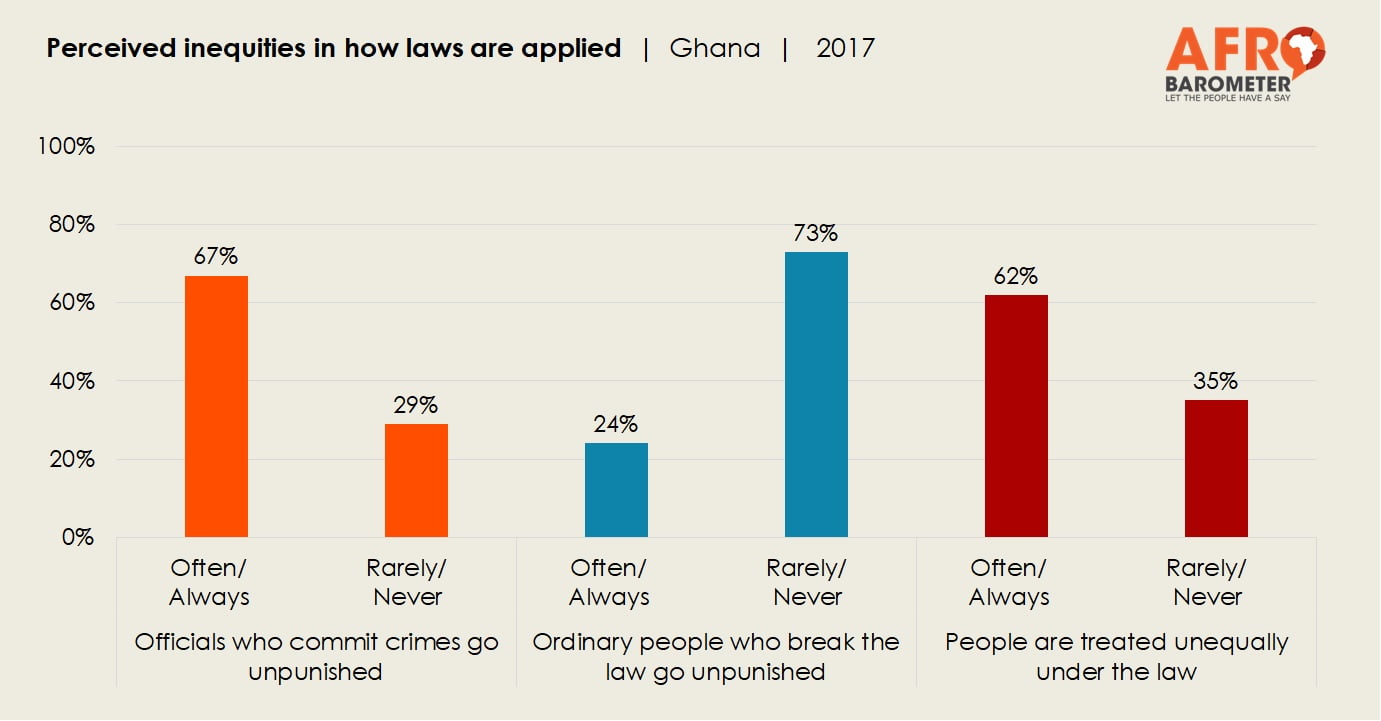