Africa’s second-largest economy has been struggling. High unemployment (27.1% overall) has reached frightening levels among South Africa’s youth (54.7%). Rising prices for fuel and basic commodities have eroded consumers’ purchasing power. The kickstart provided by the 2010 World Cup is a fond memory, as gross domestic product (GDP) growth sputtered and all but stalled, at 0.6%, by 2016 (International Monetary Fund, 2018; IOL, 2018). The embattled rand rallied as hopes for economic recovery soared with President Cyril Ramaphosa’s inauguration in February 2018, but by September, the country was officially traversing its second recession since the democratic transition in 1994 (Statistics South Africa, 2018).

The World Bank (2018) report on the ease of doing business places South Africa 82nd out of 190 countries, down from its No. 32 spot in 2008. In his 2019 State of the Nation address in February, Ramaphosa pledged his government’s commitment to address challenges affecting businesses with a plan to regain South Africa’s position among the top 50 global performers within three years. Among a raft of challenges, he singled out unemployment as needing urgent attention and called upon every South African to help “get our economy working again (News24, 2019).

In Afrobarometer’s most recent national survey, citizens confirm the deep sense of unease engendered by South Africa’s economic troubles. Most South Africans say the country is headed in the wrong direction and describe economic conditions as bad. More South Africans are experiencing shortages of basic necessities, falling into “lived poverty.” Majorities rate the government’s performance on economic indicators as poor, and close to two-thirds of citizens say they would be willing to forgo elections if a non-elected leader were able to impose law and order and provide housing and jobs. 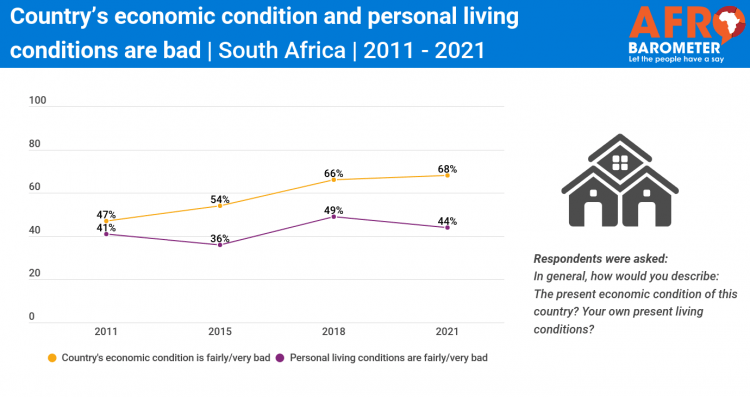