Similarly, they largely see Togo’s Truth, Justice, and Reconciliation Commission, established to deal with accusations of political violence between 1958 and 2005, as having fallen short of its objectives, leaving “victims who endured human rights abuses … disillusioned by the total impunity that yesterday’s perpetrators, still in power, continue to enjoy today” (United Nations Human Rights Office, 2012).

On the other hand, Togo’s government has taken steps in recent years to improve citizen access to the country’s legal system. These include the construction of new appeals court buildings in Lomé and Kara (a lower court building in Sokodé is on the way) and the renovation of court buildings in Aného and Atakpamé. Efforts to improve staffing have included revising the status of magistrates, court clerks, and bailiffs; increasing the number of magistrates and clerks; and establishing a training school for clerks. Finally, access has been facilitated through the creation of welcome, information, and orientation offices; legal clubs for prisoners; and a legal guide for defendants.

How do ordinary Togolese perceive their legal system and the access to justice it affords them? Core elements that define citizens’ access to justice include: 1) a supportive legal framework, 2) citizen awareness of their legal rights and responsibilities, 3) availability of legal advice and representation, 4) availability of affordable and accessible justice institutions, 5) the practice of fair procedures in those institutions, and 6) enforceability of decisions (American Bar Association, 2012).

Afrobarometer Round 6 surveys included a special module that explored individuals’ perceptions of the legal system, their access to it, and their experiences when engaging with it. (For findings across all surveyed countries, please see Afrobarometer Policy Paper No. 39.)

Survey responses in Togo depict a judicial system marked by popular distrust – a striking illustration of the observation by Bishop Nicodème Barrigah-Benissan, president of the Truth, Justice, and Reconciliation Commission, that “the biggest victim of our recurring conflict is certainly trust that we’ve totally banished from our interpersonal relationships. The Togolese seem to have erected distrust as an absolute principle” (United Nations Human Rights Office, 2012). In Togo, both lack of public trust in the courts and perceptions of corruption among judges and magistrates are well above average ratings across West Africa and across 36 African countries surveyed in 2014/2015.  Among citizens who actually had contact with the courts, many complain of long delays, the system’s complexities, a lack of legal counsel, judges who wouldn’t listen, and high costs. 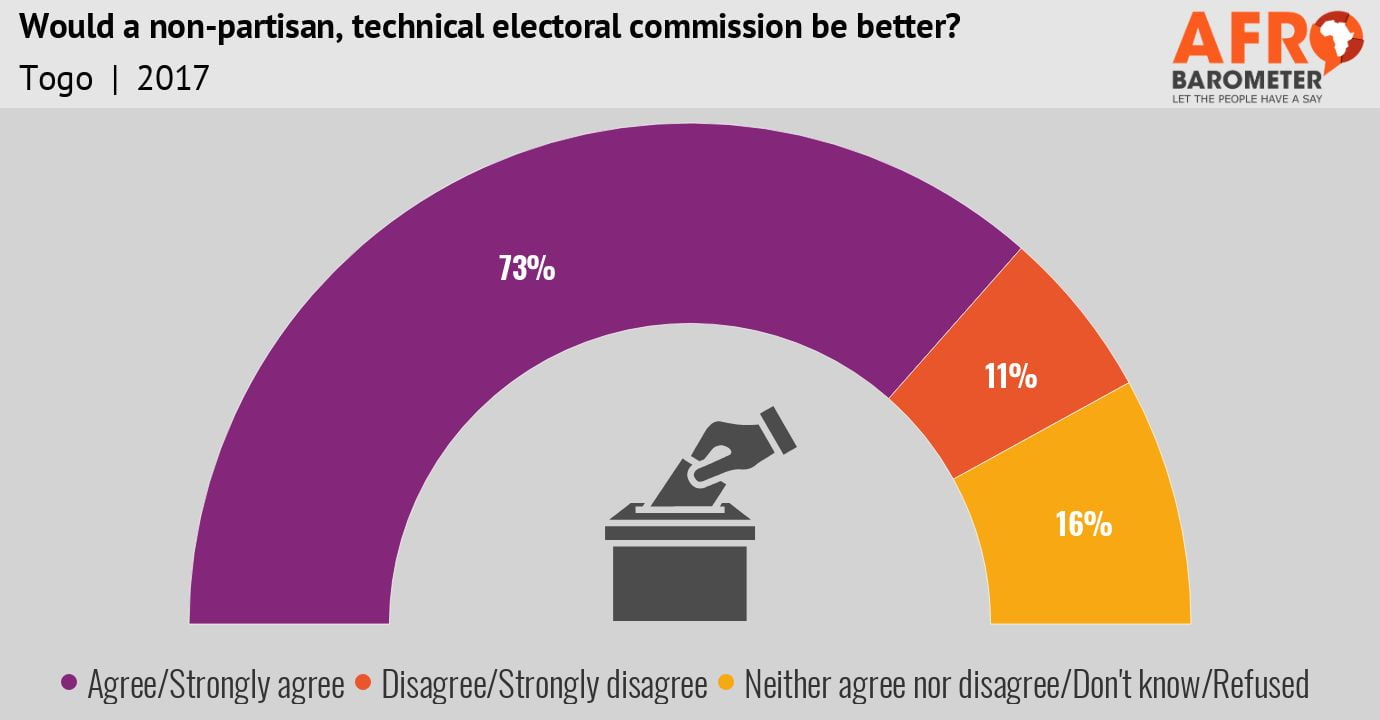