South Africa’s Youth Day 2016 (16 June) marks the 40th anniversary of the Soweto uprisings, during which thousands of high school students marched to protest the introduction of Afrikaans as a language of instruction in the public education system. The demonstrations proved to be a watershed in the fight against apartheid by bringing South African youth to the forefront of the liberation struggle (South African History Online, 2016). Mattes and Richmond (2015) argue that since then, South Africans have held “contradictory” beliefs about the nature of young people’s role in politics: “On one hand … many people see youth as the primary catalyst of activism and political change. … On the other hand … a wide range of commentators routinely experience ‘moral panic’ about the apparent ‘crisis’ of youth and its corrosive effect on the country’s political culture” (p. 1).

Despite this renewed activism among university students, findings from the 2015 Afrobarometer survey indicate little change in levels of political participation among South African youth (aged 18-35 years) in general. While half of young survey respondents say they attended a community meeting in the previous year, only minorities report engaging in various other forms of civic and protest action, including protest marches. Youth participation in demonstrations is higher than in 2011 but lower than the levels reported in 2000-2006. These results suggest that student activism is atypical of South African youth’s political behaviour in general and that any further youth engagement on issues of transformation in the country is likely to remain concentrated on university campuses.

Although perceptions of political freedoms have increased since 2008, ordinary young South Africans appear to see the country’s leadership as relatively inaccessible. However, rising contact levels with local government officials indicate that youth may be increasingly willing to hold their elected leaders accountable at this level of government. 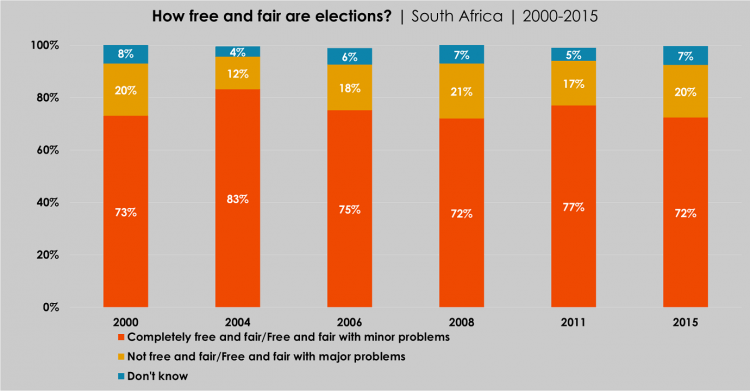