Originally published on the WAPOR site.

Unemployment, health, and education are the problems Africans care most about. Only 17% of Burundians live in zones with an electric grid. About half of Beninese trust their country’s courts. Nine out of 10 Africans wouldn’t mind having a neighbor from a different ethnic group.

How do we know so much about Africans? We ask them.

“We” is Afrobarometer, a pan-African, non-partisan research network that conducts public attitude surveys on democracy, governance, economic conditions, and related issues in African countries. Until Afrobarometer started its surveys in 12 countries in 1999, very little was known about the values and preferences of most Africans. When leaders claimed to speak for “the people,” critics had little data to challenge them.

A quarter-million face-to-face interviews in 37 countries in all regions of Africa have changed this. Over the past 18 years, Afrobarometer has made important discoveries about what Africans think – and given ordinary Africans a voice in policy processes. Highlights from its Round 6 releases suggest the wide range of topics on which users of Afrobarometer data can speak with some authority, from democracy, corruption, poverty, and media freedom to tolerance, infrastructure, and access to justice.

In mid-2018, Afrobarometer is completing its seventh round of surveys, covering 35 countries. A national partner in each country conducts the survey and disseminates country findings. Four regional core partners provide technical and management support: the Center for Democratic Development (Ghana), the Institute for Justice and Reconciliation (South Africa), the Institute for Development Studies at the University of Nairobi (Kenya), and the Institute for Empirical Research in Political Economy (Benin). CDD-Ghana manages the Afrobarometer network, and two academic partners – Michigan State University and the University of Cape Town – provide technical assistance.

To ensure the quality of its data, Afrobarometer insists on a rigorous methodology that former U.S. Assistant Secretary of State for African Affairs Linda Thomas-Greenfield describes as “the gold standard for independent opinion polls in Africa.” Afrobarometer conducts face-to-face interviews in the language of the respondent’s choice with nationally representative samples of 1,200 to 2,400 adults, yielding country-level results with a margin of error of +/-2% to +/-3% at a 95% confidence level. All respondents are randomly selected, meaning every adult citizen has an equal chance of being selected. The sample is distributed across regions/states/provinces and urban/rural areas in proportion to their share in the national population. A standard questionnaire allows comparisons of findings across countries and over time.

To promote the use of Afrobarometer data for policymaking, the network’s national partners conduct a rolling release of survey results through multiple public briefings, news releases, and analytical publications. Once a survey round is completed, the network disseminates continent-wide analyses on high-impact topics – watch for these Round 7 releases starting in late 2018 and throughout 2019 at www.afrobarometer.org and #VoicesAfrica.

Through hundreds of dissemination events and publications and thousands of news media stories, Afrobarometer has helped shape the debate on issues such as term limits, corruption, poverty, and the demand for democracy and good governance. The Economist Intelligence Unit, the United Nations Development Programme, the World Bank, and others use Afrobarometer to produce regional and global governance indicators, and in 2016, Afrobarometer data became the first public attitude survey data included in the Ibrahim Index of Africa Governance.

Afrobarometer also works hard to build capacity among partners to collect, analyze, communicate, and use high-quality data and to build ongoing relationships with key stakeholders who can become advocates and promote usage of survey findings in policy debates.

Afrobarometer data are a public good, available free to anyone. In addition to downloading data sets from www.afrobarometer.org, users with no prior experience or software can do their own analyses on Afrobarometer’s free online data analysis tool (http://afrobarometer.org/online-data-analysis).

Despite its record as “one of the greatest success stories of social science research and analytical capacity building on the African continent” (according to the Hoover Institution’s Larry Diamond), Afrobarometer still faces the challenges of securing adequate funding, especially to ensure its longer-term survival. For Round 7, financial support has been provided by the Swedish International Development Cooperation Agency (SIDA), the Mo Ibrahim Foundation, the Open Society Foundations, the Bill & Melinda Gates Foundation, the William and Flora Hewlett Foundation, the U.S. State Department, the U.S. Agency for International Development (USAID) via the U.S. Institute of Peace, the National Endowment for Democracy, and Transparency International. 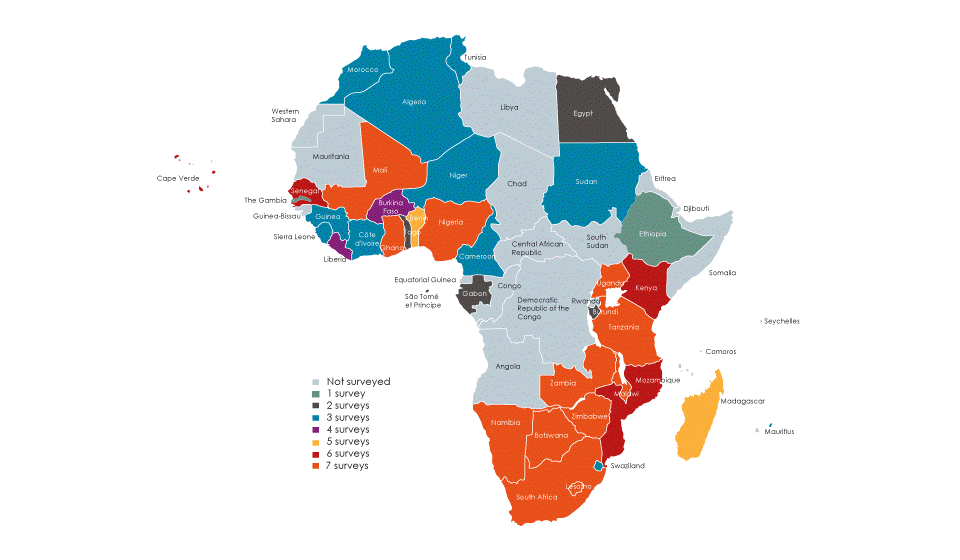