The most recent attacks on foreigners in Soweto and Kagiso that resulted in the deaths of 6 people and the looting of over 70 foreign owned shops, raises critical questions about the security of foreigners in a country that prides itself in the philosophy of Ubuntu. In the latest round of the South African leg of the Afrobarometer Survey, a substantial majority (88%) of respondents reported distrust of foreigners living in their country. This figure, which was recorded in 2011, is five percentage points higher than the 83% who displayed this sentiment in 2008, when the country experienced its worst xenophobia outbreak to date.

The survey revealed that close to five in ten (45%), South Africans blame foreigners in their country for limited job opportunities. A further (44%) indicated that South Africa should not provide protection to asylum seekers.

At the same time respondents questioned their government`s commitment to address such xenophobic attacks. Close to two thirds (63%)of respondents doubted its commitment to address migration challenges, and almost half (49%) said the government had performed "fairly badly" or "very badly" in resolving violent conflicts between communities.. These findings should be read against the background of attacks against, foreigners which have ebbed and flowed, since the 2008 crisis.

Further analysis from the survey do reveal a strong interplay between education and attacks on foreign nationals, with lower levels of tolerance that correlate with lower educated respondents (See Figure 3). The survey therefore points to the critical role that education has to play in the array of measures that the government should take to counter the sentiments that endanger the livelihoods and lives of foreign nationals.
More insights are likely to come from the next round of the South African Survey, which will be conducted in April 2015. These findings should give us critical insights into whether South Africans have become more tolerant towards foreign nationals and to what extent they take the government's state commitment to act on instances of xenophobia where and when it occurs? These and many other questions will be answered in the next round of the Afrobarometer survey-to be held around April 2015. 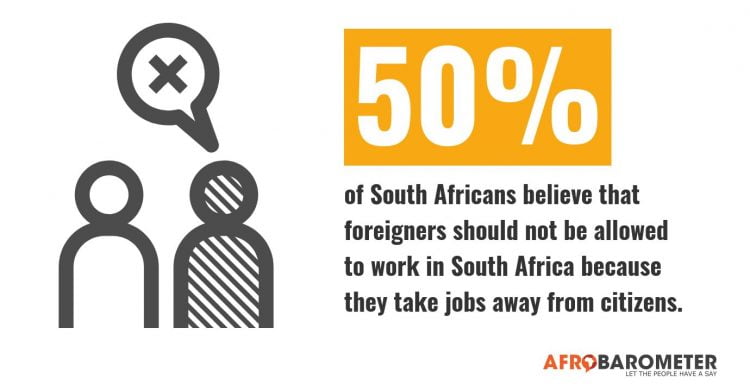