The Institute for Development Studies (IDS), University of Nairobi, released the Afrobarometer Round 6 survey findings on devolution and corruption in Kenya. The Afrobarometer an independent, nonpartisan research project that measures the social, political, and economic atmosphere in Africa. The project is managed by a network comprising Centre for Democratic Development, Ghana: Institute for Empirical Research in Political Economy, Benin; Institute for Justice and Reconciliation (IJR) in South Africa and IDS, which coordinates the Eastern African and Horn of Africa regions.

According to the findings released at the Nairobi Safari Club on 14th April 2015, a majority of Kenyans say corruption has increased over the past year and the government has performed poorly in fighting it. The police, government officials, members of Parliament, and business executives are most widely perceived as corrupt.

Although most citizens believe they can make a difference in fighting corruption by refusing to pay bribes and by reporting bribery, a majority of those who said they paid bribes did not report the incidents. The main reasons for non-reporting are fear of consequences and perceived inaction by authorities.

Among the findings, two-thirds (64%) of Kenyans say that the level of corruption in the country has increased somewhat or a lot in the past year. Three-fourths (75%) of respondents say "most" or "all" of the police are corrupt, followed by government officials (46%) and members of Parliament (45%).

Among non-state actors, business executives are viewed as the most corrupt (38%). While seven out of 10 Kenyans (70%) perceive the government as having handled the fight against corruption "fairly badly" or "very badly", a majority (69%) believe that the same government is better able to fight corruption than the opposition.

More than half (58%) of Kenyans say that ordinary citizens can make a difference in the fight against corruption while 76 % believe in the effectiveness of the media in revealing government mistakes and corruption.

Half of Kenyans support a referendum to change constitutional provisions for revenue sharing between county and national government while a majority (58%) have confidence in their county leadership and approve their performance. Trust and approval ratings are higher in rural than urban areas.

Prof Winnie Mitullah is the Core Partner Project Director for the region while Mr Abel Oyuke is the Core Partner Programme Manager. They are assisted in handling National Partner (NP) tasks by Dr Paul Kamau (IDS) and Dr Adams Oloo and Dr Joshua Kivuva, both form the Political Science Department, University of Nairobi.

Mr Sam Balongo is the Afrobarometer Data Manager for East Africa while Anthony Wafula is the Communications Manager.

IDS has become the most preferred institute to collaborate with in conducting surveys and most scholars and agencies consider the Institute as one of the first options. 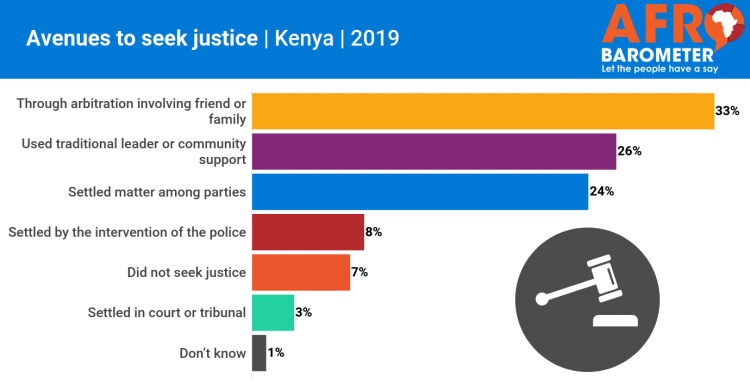