Two decades ago, the advent of mobile phones allowed millions of Africans to “leapfrog” inadequate landline infrastructure and join the communications revolution.

Could they do the same to get household electricity?

New Afrobarometer survey findings from 34 African countries suggest that many Africans are trying. With connectivity to national electric grids largely stagnant, more than one in five households (23%) now access electricity from a source other than the national grid, most often from solar panels.

The importance of household energy supply to well-being and economic development is no secret. Images of children studying, parents running small businesses from their homes, and families enjoying fans, fridges, and entertainment highlight the many ways in which access to electricity can transform lives.

But for Africans who have been waiting for national electric grids to extend, improve or become more affordable, the news is not good. Based on 48,084 face-to-face interviews in Round 8 (2019-2021) of our periodic surveys, we found that about two-thirds (68%) of Africans live in areas served by a national electric grid — that’s just 4 percentage points higher than a decade ago. The challenge is particularly acute in rural areas, where only 45% of residents have potential access to the grid, compared to 94% among their urban cousins.

Even fewer — 57% — report that their household is actually connected to the electricity grid, a proportion that has remained essentially unchanged since we first asked in 2014/2015. While citizens in Tunisia (99%), Mauritius (99%), and Morocco (98%) enjoy nearly universal coverage, fewer than one in four households in Malawi (14%), Burkina Faso (22%), and Niger (24%) are connected.

And connecting is not the end of the story. As shown in Figure 1 below, only 74% of those connected to the grid report having a connection that works “most” (36%) or “all” (38%) of the time. That means just 43% of Africans across 34 countries actually enjoy a reliable supply from their country’s national electric grid — only marginally better (+3 percentage points) than in 2014/2015. The general failure to extend the grid, improve access or increase the reliability of supply explains why, on average, fewer than half (46%) of Africans say their governments are doing a good job of providing a reliable supply of electricity. 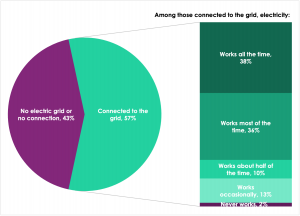 Africans with means have long supplemented or replaced inadequate grid supplies with local, off-grid sources. Over the past decade, as small-scale renewables — especially solar panels — have become more widely available and less expensive, advocates have touted their potential to enable ordinary Africans to leapfrog to better energy access and even help drive post-COVID-19 economic recovery.

By some estimates, Africa has the potential to produce 40% of the world’s solar power (as well as 10% of wind power) by 2050, even if it currently produces only 2% of global green energy.

Evidence from Afrobarometer suggests that individual households across the continent are moving in that direction. On average across 34 countries, 23% of survey respondents say their household uses electricity from a source other than the national grid, including 16% who rely solely on their off-grid source. As shown in Figure 2, 10% or more of households access non-grid sources in 20 countries. In eight countries, more people use off-grid sources than are connected to the grid. Leading the pack is Mali, where 59% of households report they rely on off-grid power.

Off-grid sources may also be helping to close, rather than exacerbate, gaps in electricity access. Off-grid energy use is more common in rural areas (30%) than in cities (14%), and in households experiencing moderate (25%) or high (24%) lived poverty than in economically well-off households (14%). 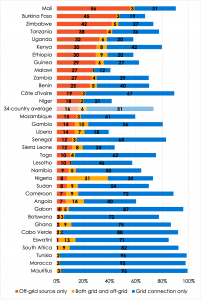 Solar power in the lead

Increasingly affordable and accessible solar panels are playing a particularly important role in extending access. Fully 62% of respondents who report an off-grid source rely on solar panels, more than twice as many as use generators (16%) or batteries/power packs (9%). Other renewables, including hydropower and wind, account for another 5%.

As shown in Figure 3, more than one in five households now rely on solar panels, in whole or in part, in nine of 34 countries. And solar panels far outpace generators in 18 countries. The balance is reversed in Nigeria, Liberia, and Angola, while the two sources are about equally important in Guinea, Cameroon, Sudan, and Sierra Leone. 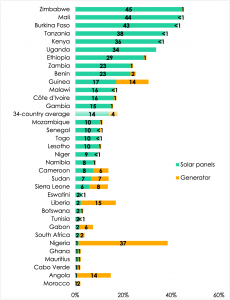 Although solar energy and generators dominate, other sources are popular in certain countries. Batteries or powerpacks play an important role in Mali and Malawi (10% of all households in both countries), while hydro power lights 6% of households in the Gambia and Ghana. Biogas — renewable fuel produced primarily from waste products in the agricultural and food industries — is uniquely important in Eswatini, where 9% of households depend on this source.

The vast majority (89%) of households that rely on off-grid sources say they own the source themselves, suggesting that prices have become relatively affordable.

The best solution — for now?

Critics point out that expanding individualized micro-system connections is far from a perfect solution for meeting Africa’s energy needs. Unlike mobile phones, solar panels are still too expensive for the poorest households, and efficiencies of scale are more difficult to realize than with centralized power grids.

Africa needs better power access not just for household lights and chargers, but also for schools, hospitals, and businesses, especially in rural areas. At least for the foreseeable future, governments will remain key players in coordinating and extending reliable grid access if countries, and not just individual households, are going to meet their energy and development goals.

But for now, localized, often renewable micro-power sources are allowing small-scale power users to leapfrog over the problem of slowly advancing power grids, providing an effective and increasingly popular solution for many households. 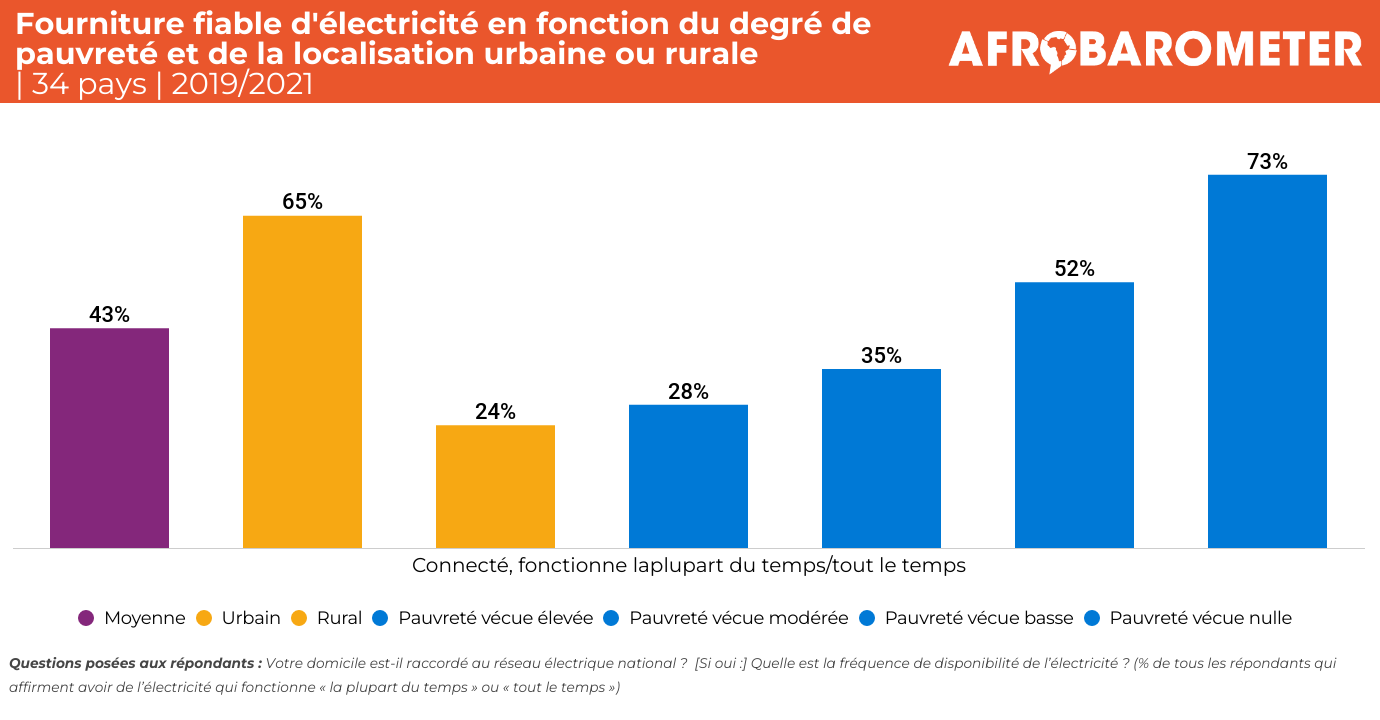