Next week in Gabon, Africa Climate Week (ACW 2022) will bring together representatives from governments, civil society, businesses, and financial institutions to “take the pulse of climate action in the region” in anticipation of the United Nations 2022 Climate Change Conference COP27 in November. They’ll grapple with the fact that although the continent contributes least to global greenhouse gas emissions that cause climate change, it is bearing a disproportionate share of the impact. According to the Mo Ibrahim Foundation’s 2022 Forum Report, which aims to “make Africa’s case” at COP27, the 10 countries most vulnerable to climate change are in Africa. While three-quarters of African countries have achieved the climate-action targets set out under UN Sustainable Development Goal 13 (SDG13), no country in North America or the European Union has done the same.

What would ordinary Africans tell ACW 2022 participants about how they perceive the threat of climate change, who is responsible, and who should act? New Afrobarometer findings from more than 24,000 face-to-face interviews offer some answers.

When Afrobarometer asked about climate change in 34 African countries in Round 7 (2016-2018), we found that 58% of respondents had heard of the phenomenon. Climate-change literacy, a combined measure of awareness and understanding of the human-driven causes and negative impacts of climate change, ranged from just 12% in Mozambique to 57% in Mauritius.

Findings from the first 17 countries in our current Round 9 surveys (2021-2022, still underway) suggest somewhat less awareness, at 51%, as you can see in the figure below. Awareness of climate change ranges from just 22% in Tunisia to 74% in Malawi.

Across the 16 countries included in both rounds, familiarity with climate change decreased by 9 percentage points. This may reflect a still-emerging understanding of climate change on the continent, with awareness that fluctuates in response to where media attention currently focuses. Building public support for prevention and mitigation efforts may require targeted interventions to increase citizens’ awareness of climate change. 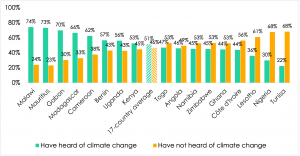 Among those who have heard about climate change, most understand that it is hurting their countries: 76% say it is making life “somewhat worse” or “much worse.” Across the 14 countries where this question was asked in both rounds, this perception has increased by 4 percentage points.

In our current survey, we ask respondents familiar with climate change who should have primary responsibility for trying to “limit climate change and reduce its impact.” As you can see in the figure below, a plurality (42%) cite their government, and another 30% identify citizens like themselves. Just 13% say that rich or developed countries bear the primary responsibility, while 8% say that belongs to business and industry. More education on the causes of climate change might change these perceptions.

Note: Respondents who had not heard of climate change are excluded. 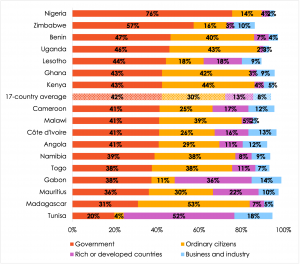 Africans believe in the power of their own engagement: 76% of those who have heard of climate change say citizens in their country can play a role in limiting it. This includes majorities in all 17 countries, reaching 80% or more in eight countries.

But people also demand action from their governments, even if it comes at a price. Nearly three in four (74%) of those who’ve heard of climate change “agree” or “strongly agree” that “it is important for our government to take steps now to limit climate change in the future, even if it is expensive or causes some job losses or other harm to our economy.” This suggests that ordinary citizens powerfully understand how serious the problem is, as you can see in the figure below.

Note: Respondents who had not heard of climate change are excluded.

To leaders who say they are already taking action, the people’s response is clear: It’s not enough. Fully 93% of those familiar with climate change say their governments should be doing more to limit it, and 92% say the same about business and industry. Nearly as many think that developed countries (88%) and even ordinary citizens (86%) are not yet doing enough.

Not surprisingly, Africans give their governments poor marks for their efforts on climate change up to now. On average across 17 countries, just 33% of respondents say their governments are doing “fairly well” or “very well” on this issue, while 52% rate their performance as poor.

Through SDG13, the United Nations calls for “urgent action to combat climate change and its impacts.” Africans who are familiar with the problem clearly agree.

The challenges – of building popular climate-change awareness and literacy and translating them into policies and initiatives – are real. But so is this citizens’ demand for greater engagement, by all stakeholders, now.